DMCI Homes formally acquired from the Bases Conversion and Development Authority (BCDA) a 5,000 square meter lot in the former Villamor Airbase driving range in Pasay City after signing the deed of sale for the property.

DMC Homes plans to build a sustainable urban community in the property located beside the Philippine State College of Aeronautics and the South Luzon Expressway (SLEX). 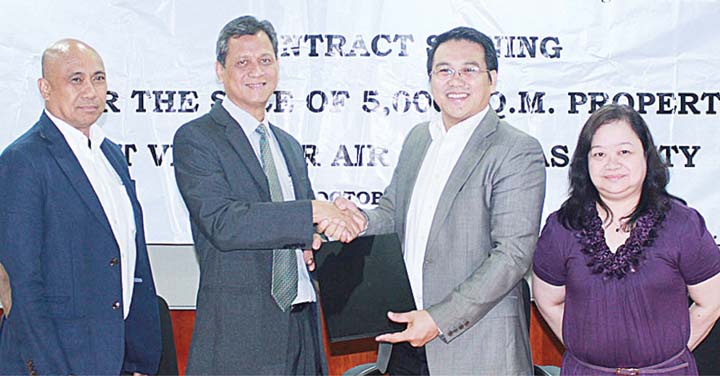 “Once again, we’ll gladly take it upon ourselves to utilize our expertise in construction and engineering to deliver yet another world-class resort-inspired community,” Austria said during the signing ceremony.

Austria also thanked the BCDA for auctioning the property.

Casanova welcomed another partnership with the triple A property developer.

“DMCI Homes is a known developer and player in the industry. We know that they’re going to bring a good development in the area,” said Casanova.

The BCDA chief said DMCI Homes has been a partner of the agency since the 1990s, when the developer built its socialized housing project called Pamayanang Diego Silang along C-5 Road in Barangay Ususan, Taguig City. The housing project is beside DMCI Homes’ township development called Acacia Estates, which consists of several residential condominium complexes.

Casanova also presented to Austria a replica of the Burgos Circle tree, the symbol of Bonifacio Global City, as token, after the ceremony.

With the new property, DMCI Homes is expected to add a resort-themed residential community in Pasay City. Currently, the two-tower La Verti Residences along Taft Avenue near Gil Puyat Avenue is the developer’s sole residential condominium community in the city.